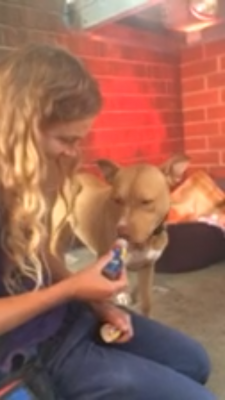 Several weeks ago a dog was brought into an outer Sydney Council’s pound, and impounded as ‘ -CC 178’. She was considered aggressive and so, at the end of a pole, was consigned to the pound’s dangerous dog cage for the safety of staff. -CC 178 had no known owner so that after the lapse of 7 days the Council under NSW law became her owner.

It was resolved to put -CC 178 down due to concerns about her behaviour. Her plight was brought to the notice of the Panel. In an urgent telephone call to the Pound supervisor, it was urged her destruction be at least deferred on the basis the Panel would find an animal behaviourist to endeavour to rehabilitate -CC 178. It was put that such behaviour suggested a poor owner and a dog suffering from fear and anxiety, and that in any event a dog deserved a second chance and should not be the victim of likely poor ownership. To the enduring credit of the Pound supervisor, this was agreed to, subject to the behaviourist assessing -CC 178 and agreeing to work with her for a month, ownership remaining with the Council. At the time of this telephone call, -CC 178 had been sedated awaiting destruction.

The animal behaviourist attended and agreed to take her. -CC 178 licked him through the bars.

Subsequently the release of -CC 178 for behavioural training became delayed. It is unclear but it appears a superior or Council Committee wished to refer her fate to the Council for decision. A Council veterinarian was then asked by the Council to conduct a brief temperament test. This was not necessary at law. It was a test -CC 178 was bound to fail, and she did. In the Panel’s view, such temperament tests are crude and without scientific validation. In particular, in this case it was pointless and only stood to damn -CC 178 in the eyes of Councillors when they met to decide her fate. Nonetheless the papers were signed by the veterinarian for inclusion in the papers for referral to Council.

The Panel then called the CEO of RSPCA South Australia, Tim Vasudeva as a result of which RSPCA SA offered to take -CC 178 from the Council for extensive assessment of her rehabilitation prospects and assume her ownership upon transfer by Council. The question was then referred to the Council’s director of risk management . The Panel called him: he was very sympathetic. Finally, the RSPCA SA’s offer was accepted.

Last Wednesday week -CC 178 was flown to a RSPCA shelter in Adelaide: click here for the video of her interaction with animal handlers shortly following her arrival. Her prospects look bright. She has been assessed by two animal behaviourists at the shelter as a good prospect for rehabilitation. She is a bit reactive with other animals. But her interaction with handlers at RSPCA SA has been very good from the time of her arrival. We have delayed posting this story until her prospects were identified upon assessment as positive.

The Panel extends its grateful thanks to RSPCA South Australia, and in particular to its CEO, Tim Vasudeva.