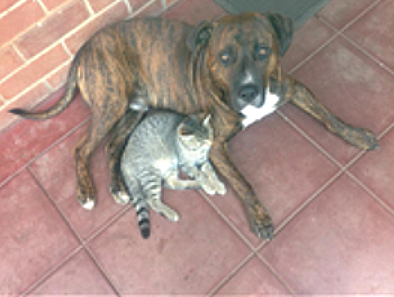 On 10 September 2014 Diesel, a 4 year old Staffy, was declared a dangerous dog by the City of West Torrens Council, South Australia, after a gate was left open at his home and he got out and attacked and killed a cat. He did so again in January 2015.  He was then impounded and his owner served with a prohibition order. The order prohibited her from owning any animals for 3 years and required Diesel be destroyed. On appeal the length of the order was reduced to 18 months but the destruction order remained in place. Diesel was due to be put down on 1 May 2015.

The Panel then intervened and a further appeal was lodged challenging the destruction order and seeking an order that Diesel be rehomed. Chair, Joana Fuller, acted as counsel. The appeal was due to be heard on 24 June 2015 but on 22 June 2015 the City of West Torrens agreed to consent orders that the destruction order be set aside and the Council be responsible for rehoming Diesel, if possible, within 3 months.

The Panel is working with the City of West Torrens to help find Diesel a new home. The Panel hopes that someone will come forward who is willing to rehome Diesel in premises that comply with the dangerous dog requirements and give him the training and care that he needs.