There is a limit to what we can say here. But a dog called Lady of a Wolfie/Kelpie mix was seized by local laws officers of a NSW rural council because of her owner’s failure to comply with the requirements of the council’s dangerous dog declaration. But Lady’s owner lived in public housing and was unable to comply with the declaration because the policy of the NSW public housing authority stipulated a dangerous dog could not be kept on the premises in any event. A destruction order was subsequently made in the local Magistrates court. An appeal to the NSW District Court was filed. In addition, under NSW law the Council’s dangerous dog declaration could be challenged after one year from when it was made, which in Lady’s case would have been possible in November 2013. Lady was alleged to have nipped or bitten different persons on two occasions. They were not serious, such as in the case of an attack. But no meaningful contest or mitigating circumstance got to be advanced on her behalf. The appeal was abandoned with no orders as to costs against Lady’s owner.

Sec 48(3), Companion Animals Act 1998 (NSW) requires a destruction order not be made unless the court is satisfied that a control order or an order permanently removing the dog from its owner will not be sufficient to protect the public from any threat posed by the dog.

The video and the expert’s report obtained for Lady’s owner for the appeal suggested that something less than a destruction order would have sufficed to protect public safety. We are unable to canvass the details of the case, save to say that after the District Court appeal, the Panel sought through an intermediary to negotiate with the Council to spare Lady’s life on certain terms. These extended discussions proved fruitless and, sadly, Lady was put down on 29 August 2013.

One compelling thing emerges from this case when there is added also the examples of other cases, namely, that the law should provide for the opportunity of “rehabilitation” and training of a dog, having regard to appropriate expert evidence and an owner’s history. There are groups or individuals who offer this opportunity. Lady was a dog who deserved another chance. Her owner loved her. But the capacity of many owners to contest a case where they themselves are vulnerable means the dog does not have an advocate. There are cases too where the dog’s conduct may be due to the owner’s failure or inability to exercise responsible care and training. In such a case should a good dog become the collateral victim?

See the video tribute below specially composed by those who met her whilst she waited in the pound, and make your own assessment about whether Lady deserved another chance.

The Panel extends its grateful appreciation to Animal Liberation NSW and in particular its Chief Executive, Lynda Stoner, for their support, including financial support for Lady. 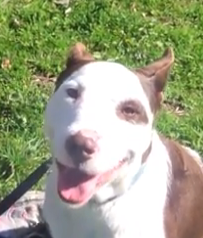