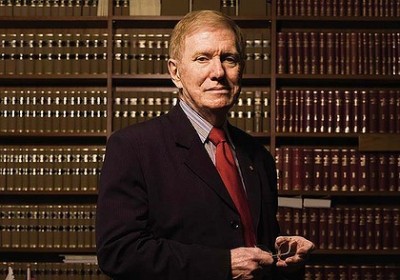 Michael Kirby AC CMG was a Justice of the High Court of Australia for 13 years ( 1996 to 2009), and was Acting Chief Justice of Australia twice. At a much earlier time, he had served as the inaugural Chairman of the Australian Law Reform Commission (1975-84).

Indeed, he has served on many national and international bodies, including as President of the International Commission of Jurists, Geneva (1995-8); as UN Special Representative Human Rights in Cambodia (1993-6); and as a member of the UNAIDS Reference Group on HIV and Human Rights (2004- ). In 2010 he was a co-winner of the Gruber Justice Prize. In 2013 he was appointed as chair of the UN Human Rights Council Commission of Inquiry to investigate human rights violations in the Democratic People’s Republic of Korea.

Parliamentary democracies, such as Australia, operate effectively when they are stimulated by debate promoted by community groups. To be successful, such debate often requires media attention. Improvements in the condition of circus animals[303], in the transport of live sheep for export[304] and in the condition of battery hens[305] followed such community debate… The form of government created by the Constitution is not confined to debates about popular or congenial topics, reflecting majority or party wisdom. Experience teaches that such topics change over time…

It follows that I consider that the Full Court erred in the exercise of its discretion in failing to give proper weight to the constitutional consideration favouring discussion in the appellant’s television programme of animal welfare as a legitimate matter of governmental and political concern.

Quite some years later and shortly following his retirement from the High Court, Michael Kirby had a self-described epiphany in reading an animal law book he was invited to launch. The book’s essays confronted him with the processes of corporatised animal slaughter. Since the night of that book launch in 2009, he has ceased to eat meat.

After noting his support for major social movements over many years, The Sydney Morning Herald newspaper  in an article published on 17 December 2011 quoted him as follows:

“Progress is made by pushing forward the boundaries of legal protection,” Kirby says. “Women got the vote; the White Australia policy, like apartheid, was consigned to history. Aboriginal Australians gained land rights. Homosexuals witnessed the end of criminalisation; disabled human beings assert their rights.