In July 2013, the Panel wrote to the Australian Competition and Consumer Commission (the ACCC) raising concerns about cosmetics companies misleading Australian consumers by marketing their products as not being tested on animals when, in fact, a report by consumer group ‘Choice’ suggested they were tested on animals.  The Panel urged the ACCC to investigate whether such marketing claims constitute misleading and deceptive conduct under the Competition and Consumer Act 2010.

Choice’s report suggested that consumers are misled in three ways:

Unbeknownst to most Australian consumers, since 1990 China has required that every cosmetic intended for sale in China be tested on animals before being made available to Chinese consumers. This means that any cosmetics company that sells its products in China tests its products on animals.

The ACCC has now concluded its investigation.  The ACCC considers that cosmetics companies that sell products in China may be engaging in misleading and deceptive conduct if they use emphatic claims such as “not tested on animals”.

The result of the ACCC’s investigation is that Australian consumers who want to purchase cosmetics that are free from animal testing should pay close attention to the representations made by the cosmetics companies because qualifications such as “except where required by law” or “except when necessary to meet government mandates or safety obligations” could mean the cosmetic is sold in China and as such has been tested on animals.

Australian consumers who want confidence that they are choosing products that have not been tested on animals may wish to visit Choose Cruelty Free’s website.  Please note this website is not affiliated with the Panel in any way. 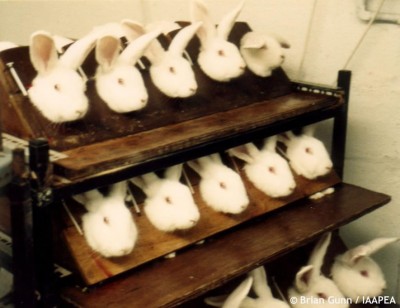 This animal testing picture shows rabbits tortured in stocks to test cosmetics and beauty and glamour products for the cosmetic industry. Stop and ban testing cosmetics on animals. Help the animals – buy cosmetics and make-up not tested on animals; support cruelty-free shopping and help save the animals.
Photo © Brian Gunn /IAAPEA