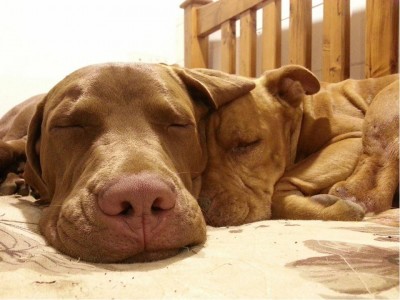 In our post of 18 November 2014 we reported that American Staffordshire Terriers, Seth (13 years) and Jaxon (10 months) were both on death row following allegations in August of an attack involving two persons, and a Pomeranian dog and a cat. Both animals were killed and one person received minor injuries. But the owner advised Sunshine City Council that it was her other dog, Tilly, who was responsible. Tilly was later put down at her owner’s request. However, on 18 August 2014 Sunshine CC declared Seth and Jaxon dangerous and issued the owner with destruction orders for both dogs. Seth and Jaxon had been impounded since 7 August 2014 and Seth had recently been struck with a debilitating illness.

Seth and Jaxon’s application for review of the Council’s determinations was due to commence on Monday, 1 December 2014 in the Queensland Civil and Administrative Tribunal. The Panel had arranged solicitor Hugh Powell and barrister Michael De Waard to represent the owner at the hearing.

Prior to the hearing commencing, Mr Powell and Mr de Waard successfully negotiated with Sunshine CC to resolve the matter. A deed of settlement was entered into the terms of which included the Council agreeing to withdraw the destruction orders against Seth and Jaxon. Seth and Jaxon are now home with their owner.

The Panel extends its grateful thanks to solicitor Hugh Powell of McInnes Wilson Lawyers and barrister Michael de Waard.