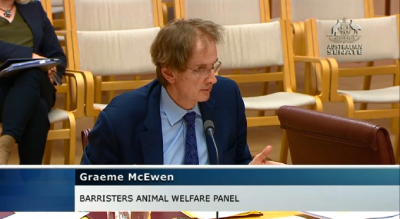 Panel Founder and director Graeme McEwen appeared late Monday afternoon 14 September 2015 in Canberra at a hearing of the Senate Rural Affairs Committee convened to consider Greens Senator Lee Rhiannon’s Bill to establish a national statutory authority with animal welfare functions to act as a spur and a counterpoint to the federal department of agriculture.

Here is the Senate video recording:

As best the Panel knows, the parliamentary Labor Party intends to introduce its own Bill to establish an independent office of animal welfare if it forms government.