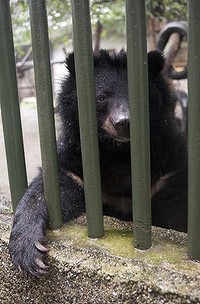 “In what’s being described as a major victory against abusive animal practices in China, a government-owned company that has bred bears for traditional medicines has agreed to convert itself into a sanctuary.

Animal welfare advocates hope the agreement, signed on Tuesday at a news conference in Beijing, will prompt the government to phase out other bear farms nationwide. Some 70 such breeding facilities are thought to exist in China, caging more than 10,000 bears. Each day, employees milk bile from the bears’ gall bladders, exposing the animals to infections, organ failures and other fatal diseases.”

Read the full story at the Sydney Morning Herald.