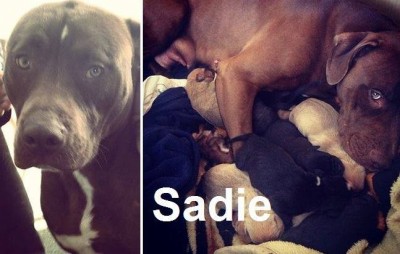 Further to our post of 29 August 2014, yesterday death row dog “Sadie” was released into the care of Brightside Farm Sanctuary in Tasmania.

Sadie is a Council declared dangerous dog subject to a destruction order. Since August, the Panel has been working to appeal the declaration, stay her destruction, and have Sadie released from the Council pound into rehabilitative care. Yesterday, two of those aims were achieved. The appeal of her declaration as a “dangerous dog” will not be heard before mid-next year, by which time hopefully Brightside’s rehabilitation efforts may convince the Council or the court to reverse the decision, enabling Sadie to live her life outside of the confines of a cage

The Panel extends its grateful thanks to Panel counsel Mark Rinaldi and solicitor, Anthony Mihal of Ulverstone law firm Walsh Day James Mihal, and to our Tasmanian Coordinator, Meg Good. A very big thank you to Emma Haswell of Brightside Farm Sanctuary for agreeing to take on the responsibility of ownership and rehabilitation of Sadie and for raising $1000 to cover the pound fees to enable her release. If Brightside had not raised the funds urgently by public appeal (in one day), Sadie would have been destroyed yesterday. That said, the Panel commends Latrobe Council (Tasmania) on agreeing to steps enabling such a positive outcome.

We will keep you apprised on Sadie’s eventual progress.