China’s Food and Drug Administration has announced that from June 2014, China plans to remove its mandatory animal testing requirements for domestically manufactured cosmetic products. “Non-special use cosmetics” such as shampoo or perfume may then have their product safety substantiated in reliance on existing safety data for raw ingredients, or European Union-validated non-animal tests instead of having to submit product samples to the government for testing on rabbits, mice and rats. This is a breakthrough. But importantly CFDA has stated that once the new system has been established, it may be expanded to include imported products and certain “special use” cosmetics as well. This would be a major step towards removing trade barriers between China and the EU, enabling cruelty-free companies worldwide to sell their products on the Chinese mainland without compromising their ‘no animal testing’ policies. Read more here. 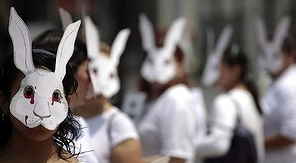 Photo courtesy of The Age

See also our post of 25 August for matters taken up by the Panel with the ACCC on marketing claims by cosmetics producers.