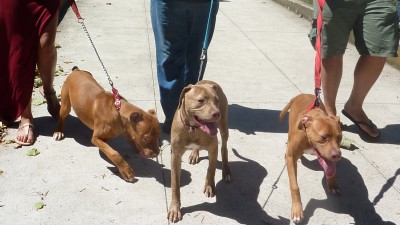 Further to our FB posts of 18 April and 12 May 2014 where we reported on the plight of Brutus, Coco and 9 puppies seized on 23 August 2013 by Hume City Council, Brutus went home to his owner on 10 June. Brutus’ owner  had lost at VCAT, Judge Harbison affirming on 11 May the Council’s declaration that he was a restricted breed dog. The Panel’s legal team secured Brutus’ safety pending an appeal (within 28 days), but in the interim Hume CC agreed to release Brutus upon his registration as a restricted breed dog. This was because Brutus had been registered by the required amnesty expiry date although not as a restricted breed dog.

It will be recalled that Hume City Council conceded Coco was not a restricted breed dog, and its declaration was revoked by VCAT. The pups were released and rehomed when they were 5 months of age, having been seized at 2 weeks of age.

The Panel thanks again its legal team, Simone Bailey of counsel and her instructing solicitor Alyshia Tuziak.